After the first three episodes of the series, director Susanna White and writer Dan Gilroy take over to take Andor in a whole new, and very welcome, direction. They look at double lives that are full of tension on Coruscant and rebellious spirits on Aldhani.

At the end of last week’s episode, “Reckoning,” Cassian Andor (Diego Luna) and Luthen Rael (Stellan Skarsgrd) left to find a place where Cassian’s unique skills could help the growing cause. This leads them to Aldhani, where Luthen has been working with a small group of rebels to attack an Imperial garrison.

Cassian shaves off his beard, which makes him look less worn out, so he can fit in with the rebels. He also puts on a fake identity as a hired gun that Luthen has brought into the cause. He decides to go by the name Clem, which was his father’s name, as we learned in the last episode. We also learn from Cassian and Luthen’s conversation that Cassian went to war when he was sixteen, right after he got out of prison and into the mud. However, his bravado about survivor’s guilt is cut short when Luthen says he knows he didn’t see action. He was a cook, and when the battle started, he ran away. This is a surprising thing to find out, since Cassian says he was never locked up in Rogue One and is not a coward. But who could blame a teenager for trying to get away from a fight that was set up by an authoritarian government to make people fight with their neighbors?

In this episode, Rogue One isn’t too far away from what’s being talked about. Luthen tries to get Cassian to join him on his dangerous mission on Aldhani. He does this by giving Cassian an expensive kyber crystal and telling him that if he dies for the cause, he should give everything he has at once instead of giving up little pieces of himself along the way. It’s painful foreshadowing that sets up what we all know is going to happen. Cassian will die for the cause, and we get to see everything that happens before a selfish man does something selfless.

Once Cassian, or rather Clem, is left with Vel Sartha (Faye Marsay), Luthen goes back to Coruscant, where he lives as a pompous, well-dressed dealer of ancient artifacts in a nicely decorated gallery. Luthen’s clothes are part of a ceremony. He takes off his dull, rough, and rebellious layers and puts on rich, bright colors made from fine fabrics. He even changes the way he looks by putting on a wig, which completely changes the way he moves. It’s a fascinating look at how agents who work against the Empire’s rule are forced to lie. Luthen has found a way to blend in with powerful people who can help him bring down the Empire. This is similar to how Cassian can sneak past enemy lines because no one is looking for someone like him. Among them is Mon Mothma, a politician played by Genevieve O’Reilly, whose wife comes to his gallery looking for a special gift for her husband’s Day of Days.

At first glance, the first part of their conversation seems to go as planned. They say nice things to each other and talk about what would be the best gift for her husband while his assistant Kieya Marki (Elizabeth Dulau) keeps her government-provided security from listening in. Luthen’s gallery is more than just a collection of objects; it is also full of mysteries. Luthen is worried about how to pay for their current attacks against the Empire, and Mon Mothma is worried about banks with a constant loop of new faces and security that she didn’t hire. Their conversation is skillfully built around loud talk about artifacts and ways to return unwanted gifts. It’s a great example of how to trick people and tell a story with many layers.

Unfortunately, Mon Mothma has to watch out for more than just political instability. She doesn’t feel safe or at ease even at home. She finds the perfect gift for her husband Perrin Fertha (Alastair Mackenzie). When she gets home, she finds out that he had a surprise dinner with her political enemies and rivals, and he doesn’t apologize when she tells him how annoyed she is. Like most marriages in Star Wars, theirs doesn’t seem like a happy one. It’s hard to understand why they got married and why they’re still together when they hate each other so much. Was it a good marriage from a political point of view? As the show takes its time to get to know each of its main characters, surely these questions will be answered. Syril Karn (Kyle Soller), on the other hand, is paying for what he did. After the failed search for the man on Ferrix, Syril and his commanding officers are taken to a higher-up and told they no longer have to do their jobs. Syril didn’t do what his boss told him to do and keep Pre-Mor off the Empire’s radar by keeping their heads down. Instead, he painted a target on their backs and led them to misery, ruin, and death just to feel important and in charge of something in his life. He walks home with his tail between his legs to his mother Bedy (Kathryn Hunter), who is both happy and angry to see him. Syril’s love for dictatorships and willingness to blindly follow are not good qualities, but it’s clear that Andor wants people to think about how they feel about him. He has a mother and a place to live. He is more than just his tight uniform and desire to be close to power. Syril has his own flaws and layers, just like Luthen does to fit in and Cassian does to get rid of his skin. In the end, everyone is just trying to find a way to get through the inevitable.

But Syril isn’t the only Empire servant who is too eager. In the fourth episode of Andor, viewers meet Dedra Meero, an Imperial officer played by Denise Gough. She says she doesn’t want to move up in her career, but it’s clear that she wants to be seen as a real force within her ranks. She is met with reluctance, resistance, and strict compliance when she tries to find out what happened on Ferrix so she can move up in her own station. While the Empire criticized Pre-Mor for overreacting to inaction, there are people in Dedra’s world who work for the Imperial Security Bureau who want to hide information and keep a low profile while carrying out the Empire’s orders. Dedra and Syril are the same thing from two different points of view.

On Aldhani, Cassian and Vel get to camp without much trouble (though they were almost found by TIE Fighters) and Cassian is welcomed to the group as Clem with annoyance, mistrust, and a general brisk bitterness. Vel didn’t have much of a choice about letting him join the group, and even though she tries to act like it was her idea, her anger is clear and palpable. 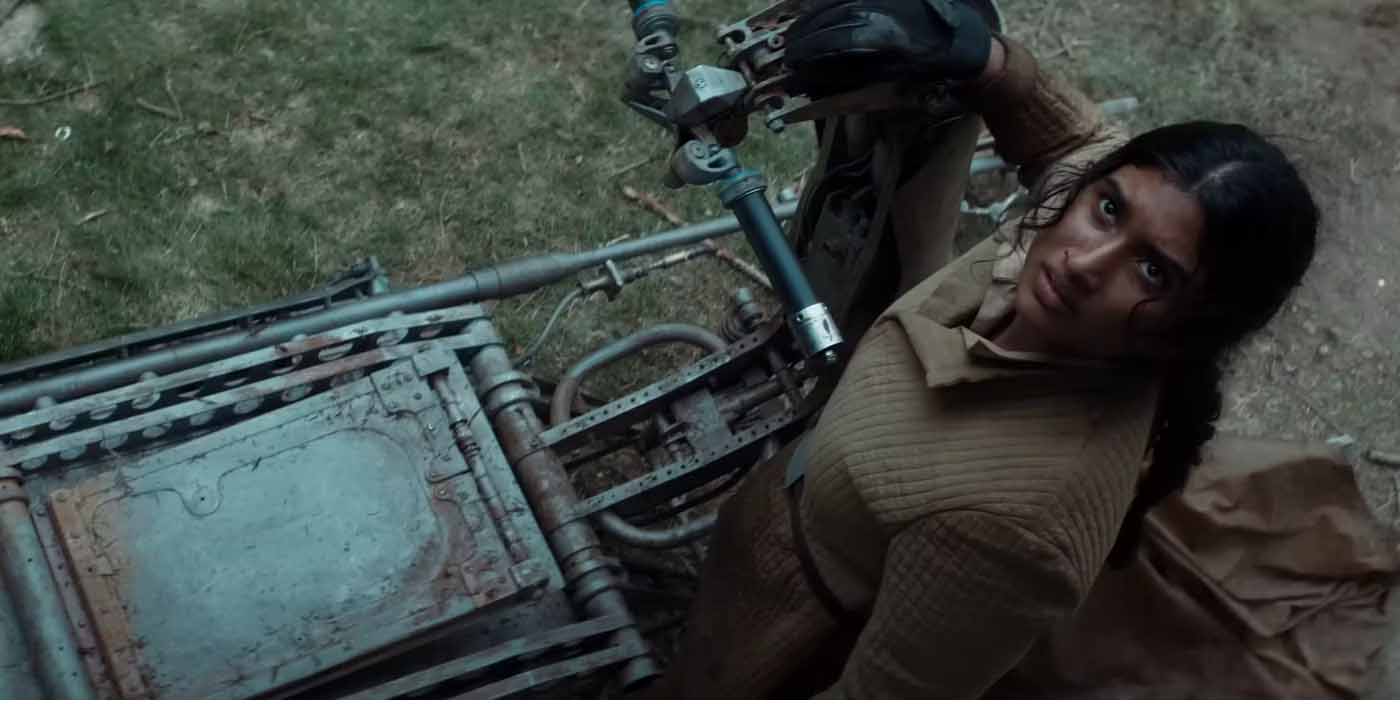 Karis Nemik, played by Alex Lawther, Arvel Skeen, played by Ebon Moss-Bachrach, Taramyn Barcona, played by Gershwyn Eustache Jr., and Cinta Kaz, played by Varda Sethu, are part of the ragtag team. They try to talk Vel out of bringing someone in at the last minute, since so much of their mission depends on accuracy and careful planning. Cassian, on the other hand, is confident in his skills as a mercenary and rises to meet the challenges they throw at him, like learning Aldhani as quickly as possible so he can blend in with the other people on the mission.

Aldhani is an interesting place to turn into an Imperial stronghold, but Vel says early on that it’s in the middle of everything and close to nothing, which makes it a good place to use as a cargo hub. Andor hasn’t been afraid to show how people suffer under totalitarian regimes that take away the uniqueness of planets in order to exploit them and the people who live there. This is in contrast to other shows that have only touched on the direct effects of the Empire on everyday people and their homeworlds. Like Kenari, Aldhani will never be the same because of the Empire’s greed.

The episode ends as Vel and her small group of rebels get ready to attack the garrison while the soldiers are weak and distracted. But there is no way to know for sure if this plan will work or if Cassian will lose new allies next week.